Flooding is a recurring problem for many people in California, and this week’s incidence caught banjo player and well-known west coast bluegrass personality Frank Solivan Sr on Monday morning as he was returning home.

According to his son, Frank Solivan II, singer, songwriter, mandolinist, and band leader with Dirty Kitchen, his dad had been trapped by floodwaters in the pre-dawn hours after dropping someone off at the airport. While crossing a creek on the ranch where he lives near Tracy, CA, his truck was engulfed by rapidly rising water.

Fortunately, Frank Sr’s good friend, Rhona Cheatwood, who owns the ranch where he lives, came quickly to the scene after getting a phone call from the truck. She stayed on site, contacted rescue workers, and kept Frank’s truck in her headlights until he was rescued.

Frank the younger tells us that his dad, now 77 years of age, was recovered just in time. After extricating himself from the truck, Frank Sr. sat down in the moving water with his feet facing downstream, and managed to tread water and safely reach the bank.

“The rescue folks found him nearly unconscious, hypothermic, confused, and barely functioning. They got his temp back up in the ER, where they kept an eye on him for a while.”

Still hospitalized for a variety of concerns, Frank II tells us that his dad isn’t completely out of the woods just yet.

“They are doing more tests to rule out a few things, like why his heart is racing while he is at rest. Some thought is that it’s left over anxiety from the whole ordeal.

He’s pretty banged up and really sore all over… knee is injured but nothing broken. He’s lucky to be alive.”

There is hope that he may be released today or tomorrow, and will recuperate further under the guidance of his close friend Sharon Elliot at her home.

Frank Sr. has been an active member of the California Bluegrass Association from its founding. He is credited with launching the organization’s esteemed Kids on Bluegrass program at the CBA Father’s Day Festival, and at the NCBS Good Old Fashioned Bluegrass Festival and the Plymouth Bluegrass Festival.

His son has always credited his father as his first and primary inspiration to pursue bluegrass music.

What a remarkable story. It seems that Frank Solivan Sr. still has more work to do before his days are done. 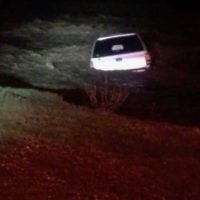